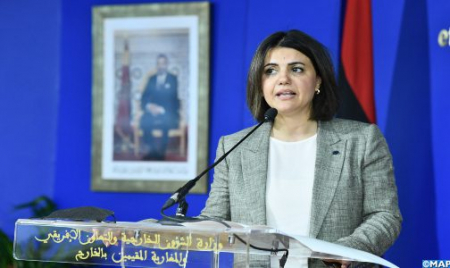 The strategic partnership between Morocco and Libya is of great importance for the whole region in order to address several challenges, namely the fight against extremism and terrorism, Libyan Foreign Minister Najla Mangoush underlines Friday in Rabat. Speaking at a joint press conference with the Moroccan minister of Foreign Affairs, African Cooperation and Moroccans Abroad, Nasser Bourita, following bilateral talks, Ms. Mangoush stressed that Libya insists on the importance of the “neutral” Moroccan policy which serves the Libyan national consensus and strengthens stability in the country. She noted in this regard the convergence and consistency of Moroccan-Libyan positions on the Security Council resolutions regarding her country. The Libyan top diplomat, who is on her first official visit to the Kingdom, also praised the efforts of HM King Mohammed VI and the Kingdom of Morocco, which hosted the Libyan political dialogue in Skhirat in 2015, as well as the continuous actions of the Kingdom to this day, through the hosting of several rounds of negotiations between the Libyan parties with a view to the unification of Libyan institutions and supporting the Libyan government of national unity. Mangoush also commended the role of Morocco in supporting the executive power of the Presidential Council and the Libyan government of national unity, expressing her wish to see the Kingdom support the Libyan agenda that will be proposed by the government of national union at the second Berlin conference, in order to achieve the objectives of the road map and support international efforts aimed at reinforcing stability in Libya. She also said that as part of the strengthening of cooperation between the two countries, it was agreed to hold the Moroccan-Libyan joint commission on consular affairs as soon as possible, in order to deal with several issues, in particular those related to visas and the facilitation of work, studies and stay. “We also seek to strengthen military and security cooperation with the Kingdom of Morocco to upgrade  and rehabilitate Libyan security and military institutions,” she added, calling for the reopening of the Moroccan embassy in Libya and for raising the level of diplomatic representation between the two countries. The Libyan minister also called for the holding of the Arab Maghreb Union (AMU) summit “as soon as possible”, given the importance of the Union in the preservation of security and stability in the region, as well as in Europe and Africa.