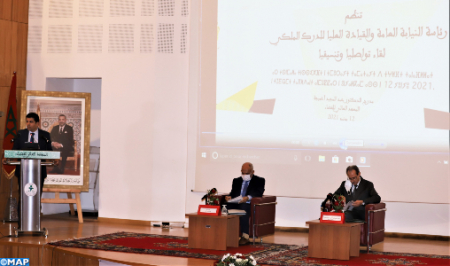 The Presidency of the Public Prosecutor’s Office and the Royal Gendarmerie held, on Saturday in Rabat, a meeting aimed at improving access to justice and the quality of services provided to users. This meeting included several workshops, notably on ways to enhance the quality of judicial investigations and to develop communication mechanisms in terms of access to justice. Speaking on this occasion, Chief Prosecutor of the King at the Court of Cassation, President of Public Prosecution El Hassan Daki said that the relationship between the Public Prosecutor’s Office and the Judicial Police is based on compliance with the legal provisions that govern their common field, namely the conduct of criminal investigations in a spirit of coordination, fluidity, mutual trust and full respect for the law. The practice reveals legal gaps of operational nature in terms of investigations and procedures, he added, noting that it is an opportunity to assess the strengths and weaknesses, as well as to examine means of improving the quality of the management of these investigations and to follow strategic orientations through the consolidation of foundations of rights and freedoms. For his part, Brigadier General Mustapaha Hamdaoui, head of the department of inspections and controls at the Royal Gendarmerie, pointed out the increased need in promoting coordination and communication between the Public Prosecutor’s Office and the Royal Gendarmerie. In this regard, he called on officials of both institutions to actively engage in improving services of the judicial police to better enshrine the principles of efficiency in judicial investigations, improve services to users and respect the rights and freedoms of everyone.