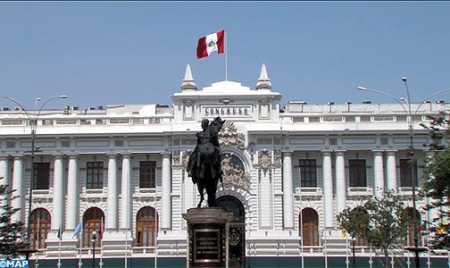 The Peruvian Congress (parliament) has urged the European Parliament (EP) “not to interfere” in the bilateral crisis between Morocco and Spain in order to not “exacerbate” tension between the two sides, which should settle the crisis “in a purely bilateral framework and through diplomatic means”. In a motion adopted on Tuesday, the Peruvian parliament underlines that the bilateral political crisis between Rabat and Madrid that broke out in April following the hosting “in a secret manner” by Spain of the leader of the separatist group of Polisario, who is wanted by Spanish justice. The motion, proposed by MP Martha Gladys Chavez Cossio, deplores that some MEPs have exploited the migration issue as a pretext to “Europeanise” a bilateral crisis and “hide the real causes” behind the crisis between Morocco and Spain. The Peruvian legislative institution has also welcomed “the commitment” of HM King Mohammed VI, in his capacity as the African Union’s Champion on the issue of migration, and his personal action in the fight against illegal immigration, as well as the Sovereign’s decision to definitively settle the issue of unaccompanied Moroccan minors in some European countries. The Congress also welcomed the major role of the Kingdom in the management of Afro-European migration and the concrete measures taken by Morocco to fight against illegal migration in its regional environment and against human trafficking, while praising the strong commitment of Rabat to maintain good neighborly relations with the European Union and the countries of the southern shore of the Mediterranean. The motion notes that the EP’s resolution regarding the bilateral crisis between Morocco and Spain contains unfounded observations with regard to the policies and mechanisms put in place by Rabat to fight against illegal immigration, noting that it does not reflect the reality of the distinguished partnership between the EU and the Kingdom and does not change the political and bilateral nature of the crisis between the two neighboring countries. The Peruvian Congress recalls, in this regard, the adoption by Morocco in 2013 of the National Immigration and Asylum Strategy, which between 2014 and 2020 made it possible to regularize the situation of thousands of migrants, especially those from Sub-Saharan Africa, noting that Morocco has hosted, since 2020, the African Migration Observatory, based in Rabat, in recognition of the fundamental role of Morocco and its experience in the area of migration. The motion notes that Morocco’s cooperation in the area of migration has made it possible to abort more than 14,000 illegal immigration attempts, to dismantle 5,000 networks active in this area, to rescue more than 80,500 migrants at sea and to prevent countless intrusion attempts. Morocco is a responsible stakeholder and has the right to demand that the responsibility for dealing with the migratory phenomenon be shared in the same spirit of commitment and mutual trust with its neighbors, the Peruvian Congress underlines.