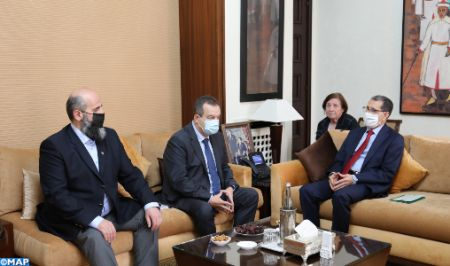 Head of Government, Saad Dine El Otmani met, on Wednesday in Rabat, with the president of the National Assembly of Serbia, Ivica Dačić, who is visiting the Kingdom leading a large parliamentary delegation. During this meeting, the two parties welcomed the quality of friendly relations between the Kingdom of Morocco and the Republic of Serbia and the level of coordination at the bilateral and regional levels, as well as within the various international fora, said a statement by the Department of the Head of Government. On this occasion, the two parties praised the commitment of both countries to several common values, notably the respect of the sovereignty and territorial integrity of States. In this sense, Dačić expressed his country’s gratitude for Morocco’s support for Serbia’s unity, and reaffirmed Belgrade’s position supporting the Kingdom’s territorial integrity, the statement said. The two officials discussed the prospects for strengthening bilateral cooperation and intensifying trade, to raise them to the level of political relations between the two countries, developing fruitful partnerships between Moroccan and Serbian economic operators and taking advantage of significant investment opportunities offered by the economies of both countries and their strategic geographical positions. They also stressed the major role that legislative institutions play in strengthening bilateral relations at different levels and in consolidating the bonds of friendship and understanding between the two countries, concluded the same source.