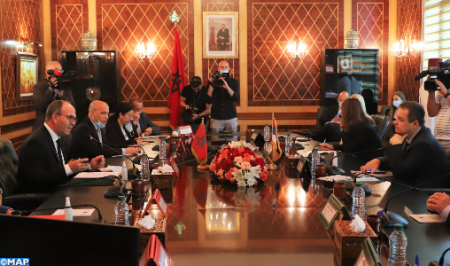 President of the National Assembly of Serbia Ivica Dačić reiterated, on Wednesday in Rabat, his country’s position in support of the territorial integrity of the Kingdom. “Serbia, which refuses the undermining of its territorial integrity, also refuses the undermining of the territorial integrity of Morocco”, underlined Dačić during his meeting with the speaker of the House of Advisors Hakim Benchamach, noting that this issue cannot be the subject of blackmail. According to a press release from the upper house, the Serbian official also stressed that his country aspires to strengthen its cooperation with Morocco in various fields, particularly the economic and commercial ones, to raise it to the level of the excellent political relations uniting the two countries. He also insisted on the need to further develop relations of friendship and bilateral cooperation with a view to a solid partnership, calling for continued regular coordination and mutual support within regional and international organizations, in the service of the interests of both countries. The Serbian official also underlined the importance of raising the bilateral relations to the level of a true partnership, encompassing the political, economic and cultural fields and which will serve the higher interests of the two countries and the two friendly peoples. In this regard, Dačić referred to the promising opportunities that Morocco offers thanks to its geostrategic position, with a view to establishing a mutually beneficial partnership. For his part, Benchamach said that the shared views on the territorial integrity of the two countries will pave the way for the establishment of partnerships in several areas, the strengthening of bilateral cooperation and the exploration of opportunities to strengthen economic and cultural ties. He highlighted the centuries-old historical relationship between the two countries, recalling the celebration last May of the 65th anniversary of the establishment of bilateral diplomatic relations. The speaker of the House of Advisors recalled the role of the late HM Hassan II and the former Yugoslav President Josip Tito in the creation of the Non-Aligned Movement (NAM), as well as the role of the two countries in the liberation of certain African states from occupation. Benchamach further expressed his gratitude to Serbia for its steadfast position supporting the territorial integrity of the Kingdom and the Moroccan autonomy initiative, it added. During the meeting, the two sides stressed the importance of strengthening parliamentary relations to unify positions and reconcile views on several bilateral and multilateral issues, stressing the role of friendship and cooperation groups as a framework for examining issues of common interest, the source concluded.