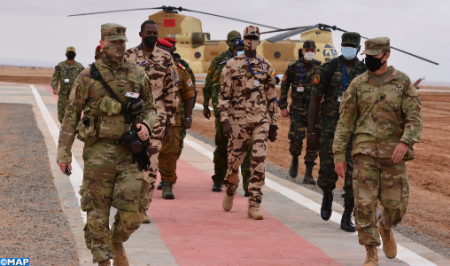 A large delegation from the General Staff of the South Zone and the American Army visited, on Wednesday, the medical-surgical field hospital set up in the Amlen commune near Tafraout (Province of Tiznit). Upon their arrival at the hospital, the members of the delegation were given details on the objectives of this medical initiative, the humanitarian resources mobilized for the success of the operation, the services provided to the local population, in addition to the number of beneficiaries. The setting up of this hospital, which mobilizes medical teams made up of doctors and nurses from the FAR and the American Army, is part of the parallel humanitarian activities of the combined Moroccan-American exercise “African Lion 2021”, which is held upon the High Instructions of HM King Mohammed VI, Supreme Commander and Chief of General Staff of the Royal Armed Forces (FAR), Colonel Mohamed Kamal, chief medical officer of this field hospital, told MAP. Operational since June 7, this hospital includes an operating room, a medical laboratory, a digital radiography and ultrasound unit and a medical sterilization unit. With a capacity of 30 beds, this field hospital with a multidisciplinary medical staff composed of 44 doctors and 51 nurses, provides in strict compliance with anti-coronavirus measures, services in several specialties including general surgery, gynecology, pediatrics, ophthalmology, otorhinolaryngology, ENT medicine and dentistry. Medication and prescription glasses are offered to patients free of charge. The 17th combined Moroccan-American exercise “African Lion 2021” will run until June 18, 2021 in the regions of Agadir, Tifnit, Tan-Tan, Mehbes, Tafraout, Ben Guerir and Kenitra, involving thousands of multinational soldiers and important land, air and sea equipment. In addition to the United States of America and the Kingdom of Morocco, Great Britain, Brazil, Canada, Tunisia, Senegal, the Netherlands, Italy as well as the Atlantic Alliance are also taking part in the exercise, in addition to military observers from around thirty countries representing Africa, Europe and America.