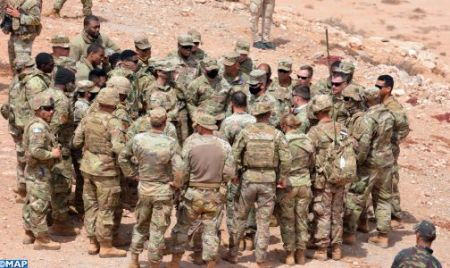 The combined Moroccan-American exercise “African Lion 2021” ended Friday at Cape Draâ (Tan-Tan) with a training between the royal armed forces and the American army, in addition to that of Senegal. Colonel Hassan Idouch, in charge of the exercise at Cap Draâ, indicated that the exercise, in which several units participated, was a resounding success, specifying in a statement to MAP that it made it possible to measure the degree of preparedness of these forces for the execution of tactical and technical missions. For Commander Ismail Ouaninech, this exercise helped achieve the expected results thanks to the involvement of all the forces and units involved. The US armed forces also welcomed the conduct of this exercise with the Royal Armed Forces, which integrated the air component with F16 and C130 aircraft. The spokesperson for the American forces involved in the African Lion 21 exercise, Colonel Rayan Dillon, paid tribute in this context to the good coordination between the Moroccan and American artillery, stressing that the “African Lion 2021” is the one of the most important military maneuvers organized by the American command for Africa “Africom”. “We aspire to develop this exercise in future editions,” he said, praising the long-standing relations and friendship between Morocco and the United States which date back to more than 200 years. The combined Moroccan-American exercise “African Lion 2021” was launched on June 7 in Agadir, upon the High Instructions of HM King Mohammed VI, Supreme Commander and Chief of General Staff of the Royal Armed Forces. In addition to Agadir and Cap Draâ, the exercise took place in the regions of Tifnit, Tan Tan, Mehbes, Tafraout, Ben Guerir and Kenitra, involving thousands of multinational military and a very large number of land, air and sea equipment. In addition to the United States of America and the Kingdom of Morocco, the 17th edition of this exercise brought together Great Britain, Brazil, Canada, Tunisia, Senegal, the Netherlands, Italy and the Atlantic Alliance, in addition to military observers from thirty countries representing Africa, Europe and America. The objectives of this exercise, considered one of the most important joint exercises in the world, are numerous: to reinforce the maneuver capabilities of the participating units, to consolidate interoperability between participants in the planning and conduct of joint operations within a coalition framework, to perfect tactics, techniques and procedures, develop cyber defense capabilities, train the air component to conduct fighter, support, and air-to-air refueling operations, consolidate maritime security cooperation, conduct naval tactics and conventional warfare exercises at sea, and conduct humanitarian activities. It includes, in addition to training and simulation of command activities and training on operations against violent terrorist organizations, land, air, sea and CBRN (Chemical, biological, radiological and nuclear) decontamination exercises. In addition, and as part of parallel activities with a humanitarian vocation, a medical-surgical field hospital will be deployed at Amlen (Tafraout) where medical and surgical services will be provided for the benefit of local populations in the region, by medical teams consisting of doctors and nurses of the FAR and the U.S. Army.