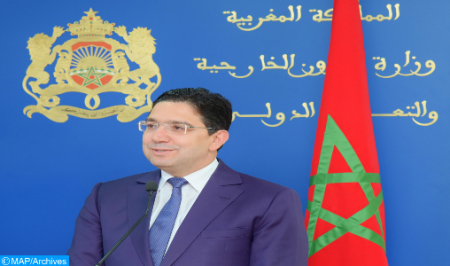 HM King Mohammed VI has, since his enthronement, made the Kingdom’s active solidarity in favor of the least developed countries (LDCs), a central aspect of his African policy, said the Minister of Foreign Affairs, African Cooperation and Moroccans Abroad Nasser Bourita. This commitment has found a new concrete form in the context of the health crisis, noted Bourita who was speaking during the High-level debate of the United Nations General Assembly of ECOSOC on LDCs, recalling that the initiative of the Sovereign to deliver aid made up of medicines, equipment and protection and prevention products to around twenty African countries, has greatly benefited the fraternal countries of the continent which are part of the LDCs. The minister also noted that Morocco’s solidarity cooperation with LDCs is structured by bilateral or triangular agreements in various fields, such as agriculture, fisheries, health, drinking water and energy, explaining that it is mirrored in practical cooperation and sharing of Moroccan expertise through technical assistance. This cooperation is also supported by several concrete initiatives, including in particular the cancellation of the debt of the least developed African countries, access to the Moroccan market for products from certain African LDCs without customs duties, the granting of scholarships, the implementation of infrastructure projects, particularly in the education, health and water sectors and the establishment of a migration policy that has helped to regularize the situation of around 50,000 nationals from fraternal African countries, since 2014, said Bourita. This solidarity-based cooperation is also being deployed through Morocco’s regional and international initiatives in the area of ​​climate change, said the minister, citing as an example the operationalization of the three Climate Committees, launched by HM the King on the occasion of the African Action Summit, organized by Morocco in 2016, on the sidelines of COP-22 and the “Triple A” Initiative for the Adaptation of African Agriculture. He also cited the “Triple S” Initiative to promote Sustainability, Stability and Security in Africa and the Universal Access to Sustainable Energy Initiative and the Climate Hub for African Youth, launched on the occasion of the 2019 Climate Action Summit. It is with this plural, solidarity-based and dynamic vision that Morocco is working tirelessly to use its experience and know-how for the promotion of cooperation with the LDCs, he stressed, assuring that the Kingdom will pursue its action through a commitment to remain in line with the strategy of cooperation and partnership with the LDCs, in particular within the framework of the new Doha process. The Minister also indicated that since the adoption of the Istanbul Program of Action, the LDCs have made real progress in vital areas, such as access to basic services, health, education, trade as well as in the area of ​​governance, adding that the current tendency to reclassify LDCs invites optimism. This trend reflects the development efforts of LDCs. Indeed, 6 countries have left the category of LDCs and sixteen other countries currently meet the criteria to follow suit, said Bourita. “We have reason to worry about the sustainability of this undeniable progress”, he said, noting that the Covid-19 pandemic has impacted the socio-economic situation and worsened the vulnerabilities of the least developed countries. However, this context of health crisis can also be transformed into an opportunity to give new impetus to cooperation in favor of LDCs, said Bourita, deeming that this debate is an opportunity to provide innovative, concrete and realistic solutions to the structural and exogenous constraints facing LDCs. In this sense, the Minister called for pooling efforts and making bold innovations to promote the sustainable development of LDCs, which is the key to a dignified and solidarity-based response.