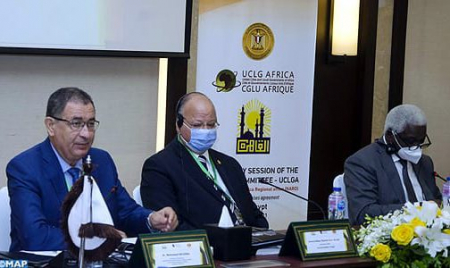 The Executive Council of the United Cities and Local Governments (UCLG) organization welcomed the role played by HM King Mohammed VI in supporting African cooperation at all levels. At the end of its 25th session which ended Friday in Cairo, the Executive Council of the UCLG sent a message of esteem and gratitude to HM the King for the active involvement of the Sovereign in the defense of the interests of the African continent, especially those related to local development. The Council also commended the great support given by Morocco to the organization in order to fulfill its mission and implement its development plans and objectives. It highly praised the Moroccan initiative to create the African Fund to support the international decentralized cooperation of territorial authorities, which represents a new impetus for the strengthening of South-South partnership, in particular with African territorial authorities. During this session, chaired by Mohamed Boudra, in his capacity as vice-president of UCLG for the North African region, the minutes of the session and the plan of action of the organization for the coming year were approved. In a statement to MAP, the Secretary General of UCLG Africa Jean-Pierre Mbassi, expressed his great esteem and gratitude to Morocco and to HM King Mohammed VI for their concrete efforts in favor of the development of the continent, recalling that the historic speech delivered by the Sovereign in Addis Ababa to the participants of the 28th African Union Summit constitutes a reference in terms of addressing development issues related to the African continent. HM the King has given a tangible impetus to South-South cooperation, through the launch and implementation of numerous initiatives aimed at achieving sustainable development in Africa, he stressed.