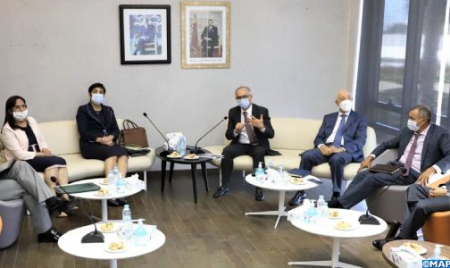 The president of the Ad-hoc Committee on the Development Model (CSMD) Chakib Benmoussa held a working session, on Monday in Rabat, with representatives of several constitutional institutions, devoted to the presentation and discussion of the conclusions of the report on the New Development Model (NMD). This meeting is part of the Royal Guidelines aiming to present the report as broadly as possible at national and regional levels and to present its conclusions to all political, economic, trade union and civil society actors. For the President of the Council of the Moroccan Community Abroad (CCME), Driss El Yazami, this meeting was an opportunity to deepen the national discussion on the conclusions of the report with representatives of constitutional institutions and to present a certain number of proposals aimed at developing a successful development model, especially since Morocco will soon hold important elections. The conclusions of the NMD general report “highlight Morocco’s ability to self-assess and establish a clear diagnosis which presents the achievements, the gaps and the means to overcome them and build the Morocco of tomorrow”, El Yazami underlined in a statement to M24, the 24/7 news channel of the Moroccan News Agency (MAP). He noted, in this regard, that constitutional institutions play an important role in the process of exchange on the new development model, by enriching the public debate on this issue and by presenting proposals and solutions to the various issues raised. For her part, the president of the National Human Rights Council (CNDH), Amina Bouayach, affirmed that the general report of the new development model has designed the new strategy for the development model in Morocco, through evaluation of development management shortcomings, praising the participatory approach adopted to prepare this report. In this context, Bouayach affirmed that the CNDH has made proposals on a number of subjects related in particular to human rights, equality and human capital, as part of its contribution, as a constitutional institution, to the public debate on the content of this report.