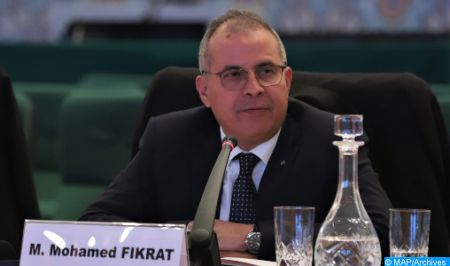 His Majesty King Mohammed VI attaches great importance to the success of the implementation of the conclusions of the General Report on the New Development Model (NMD), said, Wednesday in Marrakech, Mohamed Fikrat, member of the Ad-hoc Committee on the Development Model (CSMD). Speaking at the opening of a meeting of institutional feedback organized at the headquarters of the wilaya of the region Marrakech-Safi, as part of the cycle of regional meetings dedicated to explaining the content of the General Report on the NMD, Fikrat noted that this report is the outcome of a “serious citizen work”, which lasted many months and which intends to meet the expectations of citizens. In this context, he called for a great adhesion of all actors in the region to succeed in the implementation of this strategic national project, noting that this meeting, 3rd step after those of Rabat and Beni Mellal, aims to disseminate the conclusions of the general report on the NMD through direct interaction with regional institutions, civil society and citizens. Fikrat recalled that the NMD has been developed in a participatory manner with all the forces of the nation, noting that the actors of the Marrakech-Safi region have participated and contributed to enrich the report with their relevant proposals notably through technical factsheets.