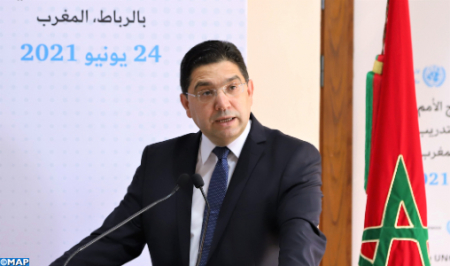 The opening in Rabat of the United Nations Office for Counter-Terrorism and Training in Africa (UNOCT) is part of Morocco’s vocation and engagement, under the leadership of His Majesty King Mohammed VI, towards its continent, said Thursday minister of Foreign Affairs, African Cooperation and Moroccans Abroad, Nasser Bourita. The opening of this program office for Africa in Rabat “falls naturally within Morocco’s vocation and engagement towards Africa under the leadership of His Majesty King Mohammed VI. It confirms Morocco’s role as a regional hub, provider of stability and security, in West-Africa and the Sahel in particular and in the continent as a whole,” he said in an address at the inauguration ceremony of the headquarters of this office, the first of its kind in Africa. It is also an “eloquent example” of possible synergy between a Member State and the UN Secretariat to implement the UN Global Counter-Terrorism Strategy, added Bourita, who considers it as an illustration that “the operational action of training and sharing experiences and good practices is as important as the political commitment”. “Coordination is, indeed, a fundamental basis for fighting a transnational phenomenon like terrorism,” said the minister, noting that Morocco will assume “with honor and commitment” this responsibility of “natural host” of the United Nations Office for counter-terrorism in Africa. Referring to the main security challenges for the continent, Bourita highlighted “the alarming trend of increasingly dangerous development of the terrorist threat in Africa”. “No less than a decade ago, terrorism was considered an external (and extrinsic) threat to Africa. Nowadays, terrorism found a home on the continent,” he noted, adding that “at a time when counterterrorism efforts were focused on other parts of the world, some were confident that most of African regions were immune from the spread of this scourge”. Today, four major terrorist groups are established in Africa, with a dozen of affiliated groups, active in more than 25 African countries, warned Bourita, noting that the continent is not only the new ground of returning foreign terrorist fighters, but it has also become a self-homeland for terrorists who have perpetrated last year only about 7,108 attacks that caused 12,519 victims. He added that the Sahelo-Saharan region is becoming the second most affected area in the world by terrorism, noting that the year 2020 was “the deadliest in terms of terrorist violence” in the Sahel with a death toll of 4,250, an increase of 60% compared to 2019. The economic impact of terrorism in Africa over the past 10 years has amounted to 171 billion USD, including 13 billion USD for 2019, he noted, adding that the economic cost of terrorist violence has been multiplied by nine since 2007. According to Bourita, the alarming evolution of terrorism in Africa requires “national ownership and enhanced capacities, systematic coordination among Africans and substantial support from the international community. “Africa deserves more than ever a greater mobilization and adapted support to its specific needs,” he said. Thus, the ambition of the Rabat Program Office for Counter-terrorism and Training in Africa is to “unite our efforts to deal with the complex and evolving terrorist threat,” said Bourita. The Program Office, as training center, aims at strengthening the capacities of member states through the development of National Training Programs and counter-terrorism training curricula, he said, noting that it will provide a significant contribution to support African states in their fight against terrorism. Its main mission will consist in delivering immediate knowledge, skills and tools in the counter-terrorism related fields of border security, prison management, prevention, deradicalization and reintegration, noted the minister, adding that the priority is to ensure that the activities of the Program Office are perfectly in line with the needs of African states and complementary to the various initiatives launched by the countries of the continent. Bourita also said that the inauguration of this Program Office comes at a particular juncture marked by increasing efforts to strengthen international cooperation on counter-terrorism priorities. As a contributor to the security of the African continent and the development of its brotherly nations, Morocco will spare no effort to support the Office objectives and activities, he stressed. Morocco reaffirms its commitment to share with African states the singular expertise of its counter-terrorism strategy, developed during more than two decades under the leadership of His Majesty King Mohammed VI, the minister concluded.