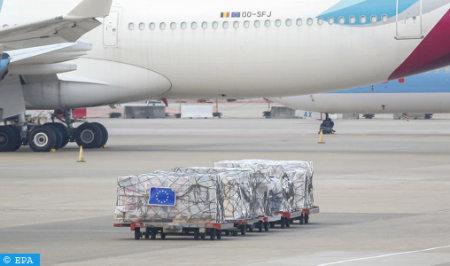 The Moroccan delegation taking part in the session of the Human Rights Council (HRC) denounced, on Thursday, in the strongest terms, the deplorable acts and greed of the Algerian regime, particularly with regard to the diversion of humanitarian aid intended for the population of the Tindouf camps. Speaking during the Interactive Dialogue with the Independent Expert on International Solidarity, as part of of the 47th session of the HRC, the Moroccan delegation pointed out in a statement the responsibility of the Algerian regime in the diversion of humanitarian aid in the order of 105 million euros between 1994 and 2004, granted by the European Union to the population of the camps of Tindouf, diversion duly documented by the competent authorities. “It is pitiful that a country like Algeria can, out of greed, levy a tax of 5% on this aid,” said the Moroccan delegation, stressing that the Kingdom calls for forcing the audit on the use of advanced humanitarian aid, and the registration of the population of the Tindouf camps in Algeria, as advocated by the Security Council, UNHCR and the European Parliament, and refused by the Algerian regime, for strictly political reasons, in violation of international humanitarian law. “Much more seriously, this isolated population, under the control of Algerian forces for more than 45 years, are under the watchful eye of separatist militias, reinforced by weapons of all kinds, including missiles and armor, arsenals provided directly by the Algerian authorities, in full view of everyone,” the delegation noted. The delegation also took the opportunity of this dialogue with the Independent Expert on International Solidarity to expose the actions and maneuvers of the Algerian regime against the territorial integrity of Morocco. Refuting the false allegations of the representative of Algeria, the Moroccan delegation recalled that “the Moroccan Sahara is today a haven of solidarity, peace and economic development”.