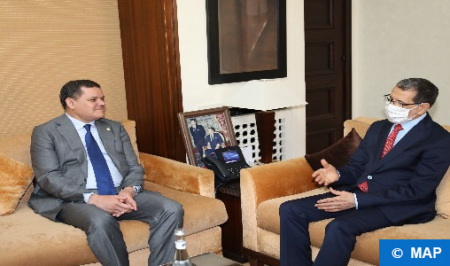 Head of the national unity government in Libya, Abdelhamid Dbeibah, expressed, Monday in Rabat, his gratitude for the efforts made by Morocco to unify Libyans. “We suffered during the previous period of divisions” and Skhirat was a place of meetings of the different components of the Libyan people, said Dbeibah at a press conference after his talks with head of Government, Saad Dine El Otmani, adding that “we are grateful to Morocco, the King, the government and the people, to have brought together the Libyans in Bouznika, Skhirat and Tangier”. In this regard, he welcomed the efforts made by Morocco, under the leadership of His Majesty King Mohammed VI, to support the Libyan cause and support the organization of elections and the political and economic process in Libya. The Libyan official also expressed the willingness to develop economic relations and investment and promote tourism between the two countries, wishing the lifting of restrictions on movement of Libyans and Moroccans between the two States as soon as possible. For his part, El Otmani expressed, in a similar statement, his pride in receiving the head of the government of national unity in Libya, commending the relations of brotherhood, as well as the historical, social and political ties uniting the two countries. The visit of Dbeibah who is leading a large delegation tends to develop relations at all levels, he said, expressing the willingness of the Kingdom to strengthen them further in anticipation of the holding of Libyan elections and the success of this political stage. He also noted that Morocco can only support any consensual solution in Libya, adding that Libyans remain masters in their decisions.