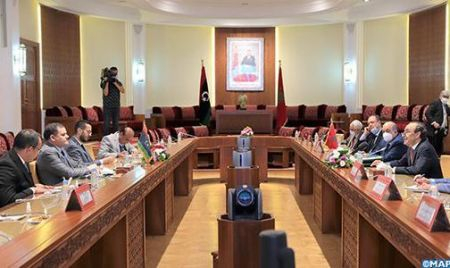 Head of the national unity government in Libya, Abdelhamid Dbeibah, said on Monday in Rabat that Morocco has always been a welcoming land to resolve disputes between the Libyan parties. “The Kingdom has always been a welcoming land to resolve our differences, especially through the meetings of Skhirat (first stage) which hosted the most difficult political discussions between the Libyan parties, “said Dbeibah at a press statement after his talks with speaker the House of Representatives, Habib El Malki, while welcoming the efforts made by Morocco, under the leadership of HM King Mohammed VI, to support institution building and help overcome the various crises. The Libyan official expressed, on this occasion, his deep appreciation and gratitude to the Kingdom for the efforts made to support the Libyan people and achieve stability and security in his country. He added that this visit is part of the consultation and consolidation of bilateral relations in all areas to serve the interests of the two brotherly peoples. “We aspire to the activation of the high joint Moroccan-Libyan Commission, through the holding of its 9th meeting,” he noted, expressing the wish to hold, in the short term, the joint Commission on Consular Affairs to resolve the problems of visa and residence between the two countries. The Libyan official stressed the need for the activation of the Arab Maghreb Union, which would overcome all the difficulties and challenges in the region, while hoping that Morocco provides all the necessary support to his country to succeed in the elections scheduled for next December. For his part, El Malki said that the Kingdom has been and remains at the side of the brotherly Libyan people, adding that Morocco is driven by “a strong political will to contribute to the reconstruction of the new Libya”. Morocco considers that “the solutions are within Libya and not elsewhere,” he said, reiterating the support of the Kingdom to the inter-Libyan dialogue which is the only way to reach a final solution to the current crisis.