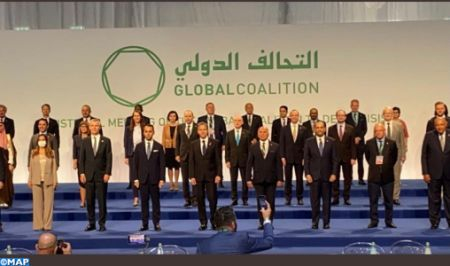 Terror groups on the African continent have shown a willingness to cooperate with organized crime networks and separatist groups, said minister of Foreign Affairs, African Cooperation and Moroccans Abroad, Nasser Bourita. “This trend must be carefully monitored because it deeply penetrates local populations and exploits porous borders to move freely and recruit fighters,” Bourita stressed at the opening of the ministerial meeting of the global coalition against Daesh in Rome on Monday. He said that in less than six years, terrorist attacks in Africa have increased from 381 (2015) to 7,108 (2020) with a ninefold increase in the number of victims, from 1,394 deaths to 12,519. “A quarter of the world’s terrorist violence takes place in Africa, with terrorist groups active in half of African countries,” the minister explained. Emphasizing the imperative of maintaining maximum pressure on the terrorist entity, Bourita welcomed the Coalition’s support to the countries of the region in two key areas, namely the collection and protection of evidence from the battlefield and the necessary comprehensive border security. “We remain ready to support these efforts and share our experience, especially in security and border management,” he said. Stressing the importance of devoting as much effort to counter the radical discourse of Daesh, which fuels recruitment around the world, he expressed Morocco’s commitment “to contribute to this endeavor with its singular experience”. Bourita also stressed the importance of engaging African partners in the fight against the scourge of terrorism, noting that “African partners are indeed best placed to know the threat in their respective regions and the capabilities that must be strengthened, to ensure a lasting defeat against Daesh.