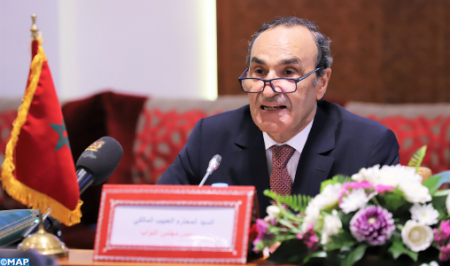 The Speaker of the House of Representatives (lower house), Habib El Malki, underlined, Monday in Rabat, the importance of parliamentary diplomacy in opening up new prospects for cooperation between Morocco and Libya. During his talks with the head of the government of national unity in Libya, Abdelhamid Dbeibah, who is leading a large delegation on an official visit to Morocco, El Malki underscored the distinguished relations binding the legislative institutions of the two countries, says a statement issued by the House. On this occasion, El Malki reiterated the Kingdom’s support for the Libyan people, adding that Morocco is driven by a strong political will to contribute to the reconstruction of Libya and to support the Libyan dialogue. He also noted that national reconciliation remains the only solution to the Libyan crisis, recalling the main stages of the Libyan dialogue that Morocco hosted in Skhirat, Bouznika, Rabat and Tangier. El Malki also said that the elections scheduled for the end of the year in Libya will help build a stable state. For his part, the head of the government of national unity in Libya welcomed the efforts undertaken by the Kingdom, under the leadership of His Majesty King Mohammed VI, for the resolution of the Libyan crisis, expressing his thanks to the Sovereign and to Morocco for the actions carried out with a view to enabling Libya to get out of the crisis and for having hosted the Libyan dialogue launched in Skhirat. Dbeibah also called for strengthening economic and trade cooperation between the two countries, noting that the “new Libya” needs Moroccan expertise and enterprises. He said that a Moroccan-Libyan economic forum will be organized as soon as possible, in order to discuss investment opportunities in the two countries and enable businessmen to establish economic and commercial partnerships. This meeting was an opportunity to discuss several issues of common interest, the statement adds, noting that the two sides stressed the importance of holding the Moroccan-Libyan high joint commission, promoting economic and trade relations and facilitating travel between the two countries, as well as strengthening consultation and coordination in the various international fora.