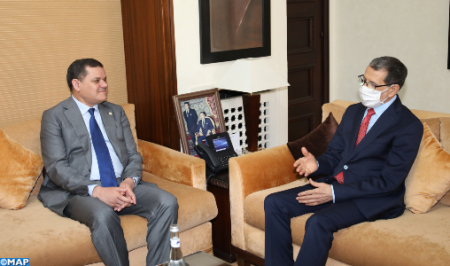 Head of government, Saad Dine El Otmani, reiterated on Monday in Rabat Morocco’s active and continued support to any consensual solution to the Libyan issue. During a meeting with the Head of the national unity government in Libya, Abdelhamid Dbeibah, El Otmani stressed that Morocco wishes the success of the upcoming elections in Libya, the Department of the Head of Government said in a statement. He also expressed his satisfaction with Dbeibah’s visit, adding that it is an opportunity to give new impetus to bilateral relations and cooperation. For his part, the Head of the national unity government in Libya expressed the gratitude of his country and of the Libyan people to HM King Mohammed VI for the continued efforts of the Kingdom in favor of Libyan reconciliation, as well as for its impartial positions, welcomed by the Libyan people. During this meeting, the two officials highlighted the solidity of the long-standing friendly relations between the two countries and peoples and affirmed the willingness of the two governments to promote bilateral cooperation in various fields and to reinforce Moroccan-Libyan trade. They also voiced the hope to hold soon the Moroccan-Libyan High Joint Committee. These talks were held in the presence of members of the delegation accompanying the Head of the national unity government in Libya and the Chargé d’Affaires of the Libyan Embassy in Rabat, the statement concluded.