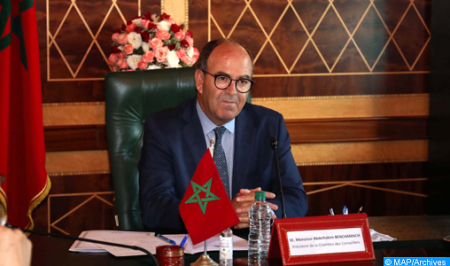 The House of Advisors’ Bureau welcomed the support of the Arab Parliament to Morocco in its efforts aimed at playing a key role in the areas of migration, asylum and the fight against illegal immigration. During a meeting chaired by the Speaker of the House of Advisors (upper house), Hakim Benchamach, the bureau of the house highlighted the stances of support expressed by the Arab Parliament in a decision adopted last Saturday at the end of an emergency meeting devoted to the examination of the resolution of the European Parliament in the context of the bilateral crisis between Spain and Morocco. The meeting aimed at the examination of the agenda of the House of Advisors has approved the oral question session scheduled on Tuesday, June 29, said a statement of the Upper house. At the legislative level, the Bureau has decided to hold a plenary session on Tuesday, June 29, following the oral questions session, which will be devoted to the examination and voting of legislative texts. It was also agreed to hold a consultative virtual meeting of the presidents of African parliaments on July 8, 2021, at the headquarters of the Moroccan Parliament. The Bureau also approved the program of the conference to be organized by the Moroccan Parliament and the Parliamentary Assembly of the Council of Europe on July 13, on the theme: “Women in politics: how to reach equality? “, as part of the Council of Europe program to support the role of Parliament in the consolidation of democracy for the period 2021-2023.