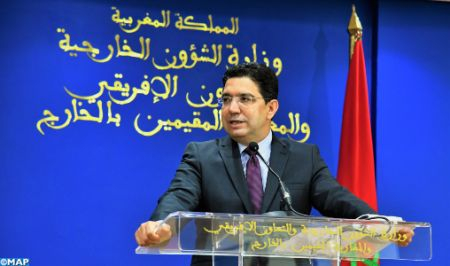 Morocco remains sincerely committed to the stability and development of the Sahel, a region with which the Kingdom shares a common history and strong human ties, said Friday in Rabat, minister of Foreign Affairs, African Cooperation and Moroccans Abroad, Nasser Bourita. In a statement to the press after talks with the High Representative of the African Union (AU) for Mali and the Sahel, Maman Sambo Sidikou, Bourita noted that His Majesty King Mohammed VI has always considered that simplistic approaches to the Sahel are doomed to failure and that the region must be approached with responsibility and serenity, while addressing in a comprehensive manner all its constraints. Unfortunately, the last decade has been marked by a proliferation of initiatives, a mobilization of resources and a multiplication of diplomatic events with few results, lamented Bourita, adding that it is now important for the international community and the AU to update this approach and adapt it to the new constraints and realities of the region, while drawing the necessary lessons from previous experience. The minister also stressed “the full support” of Morocco to Samba Sidikou after his appointment as AU High Representative for Mali and the Sahel. With his experience, knowledge of the region and his network, Sambo Sidikou will bring added value to the work of the AU and the international community on this issue, said Bourita. Morocco, in accordance with the High Instructions of His Majesty the King, will stand by Samba Sidikou for the success of his mandate, said Bourita. The Kingdom, which maintains strong and important bilateral ties with each of the Sahel countries, will continue to be actively and constructively involved to act, as part of the international effort, for the stabilization and development of this region, he said, recalling that the countries of the region want Morocco to remain active and present alongside them in this particular phase.