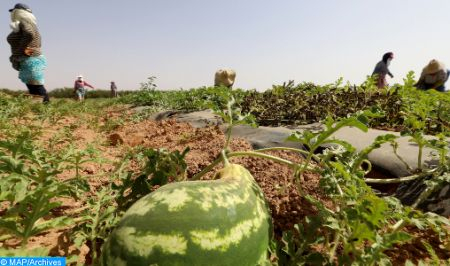 The ministry of Agriculture, Fisheries, Rural Development and Water and Forests denies “categorically” the rumors about the quality of watermelon put on the market, reassuring that the fruit is perfectly consistent with food safety standards. “All tests conducted show a total absence of contaminants from this fruit (pesticide residues, heavy metals and bacteria),” the ministry said in a statement. In spite of the denials and explanations presented previously and given the persistence of some false information totally unfounded and rumors on this matter, the ministry explained that the various tests conducted by the National Office of Food Safety (ONSSA), as part of the monitoring plan and control of watermelon during the current campaign (year 2021), have revealed the absence of contaminants in this fruit, namely residues of pesticides, heavy metals (lead and cadmium) and bacteria (salmonella and coliforms). The tests also showed that this fruit is fully compliant with food safety standards, added the same source, stating that on June 20, 2021, some 218,000 tons of watermelons were exported during this campaign, almost the same tonnage as the previous campaign on the same date contrary to allegations of a decline in exports due to product quality. “These exports were mainly intended for countries of the European Union. In addition, the European monitoring system has reported no non-compliance on the Moroccan watermelon exported during the last 5 years,” noted the ministry. “The rumors shared on social networks about the harmfulness of this product are dangerous, irresponsible and unfounded and are detrimental to the production of watermelon crop and farmers,” the ministry pointed out.