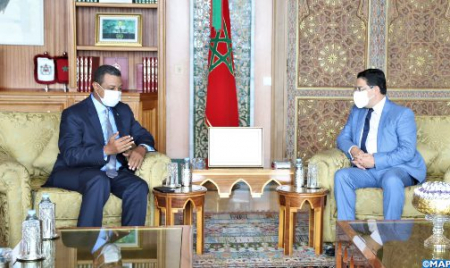 Minister of Foreign Affairs, African Cooperation and Moroccans Abroad, Nasser Bourita, on Tuesday held talks in Rabat with the president of the Bureau of the Committee of external relations at the Mauritanian National Assembly, Mohamed El Mostapha Mohamed Lemine Zeidane, which focused on the means to develop bilateral relations and the partnership between the two countries. Speaking to reporters at the end of these talks, the Mauritanian MP said that the meeting was fruitful, noting Mr. Bourita’s readiness to “consolidate bilateral relations so that they are productive and useful for the peoples of the two brotherly countries”. He stressed that his visit to the Kingdom is intended to strengthen bilateral relations between Morocco and Mauritania in general and between the legislative institutions of the two countries in particular. It is also about getting informed on the action of the two houses of the Moroccan parliament and exchanging experiences and expertise in the legislative field, he said, expressing the wish to advance bilateral relations between Morocco and Mauritania.