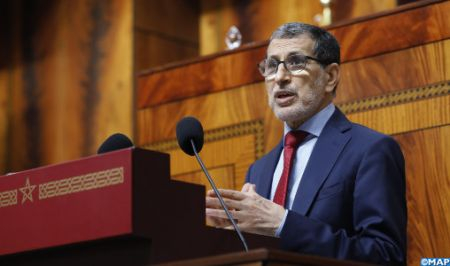 The progress report of the government action is “qualitative and positive” since it is rich in achievements with concrete impacts on the citizen, stressed Tuesday in Rabat, head of Government, Saad Dine El Otmani. “This progress report is characterized by a number of structural reforms that would have an impact on future governments,” said El Otmani who presented this report at a joint session between the two Houses of Parliament, in accordance with Article 101 of the Constitution. He described the government as “social par excellence”, because it has given, through its programs, “a special interest in human development and social cohesion, especially with regard to the system of education, training and scientific research, which is one of the main reforms undertaken by our country in the field of promoting human development”, noting the adoption of the framework law 51.17 for the first time since independence as a binding reference framework for all parties. The education budget has increased from 54 billion dirhams to 77 billion dirhams in 2021, an increase of 33%, because “despite the context of the pandemic and its negative impact on public finances, not only the education budget has increased, but that of all social projects aimed at social cohesion,” he stressed. El Otmani unveiled a set of figures on preschool education that he called “success story”, saying that the program of generalization of preschool education has achieved a qualitative leap in terms of the number of beneficiaries who reached 900,000 children, or 77% in 2021. The head of Government also emphasized the achievements of the national program of inclusive education for children with special needs, stressing that the inclusive institutions amounted to 3,004, or 31%, with 34,000 children. The same efforts have been made in higher education and vocational training, granting scholarships to students and pupils of vocational training, and through the program of medical coverage whose beneficiaries have increased to 300,000 students in 2021, he added. Regarding the health sector, El Otmani stressed that the government has focused from the outset on increasing budgets and budgetary positions, stating that the annual number of these posts has risen from 1,700 to 4,000 to reach 5,500 in 2021. Concerning efforts related to budgets, El Otmani said that the budget devoted to health has increased by about 25% between 2016 and 2020, an improvement of 7.27% to the general budget of 2020, stressing that this is a positive development towards the goal of reaching 10% in the future.