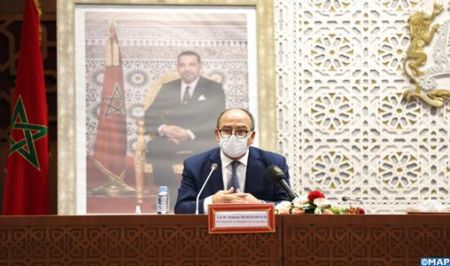 Africa is full of huge potentials allowing it to have a positive positioning in the new post-Covid-19 world order, said Abdelhakim Benchamach, speaker of the House of Advisors. Africa “has enormous economic, demographic and natural potentials which, with the emergence of a new generation of leaders aware of their historical responsibility, offer a valuable opportunity for a positive positioning of our continent in the new post-Covid-19 world order,” said Benchamach who was speaking at the opening of a consultative meeting of speakers of African parliaments. He explained, in this regard, that the process of economic recovery must be based on cooperation, trust and integration, arguing that “it is difficult for our countries to succeed on this path by relying only on their own capabilities, especially since each country will necessarily need large markets, large flows of foreign investment and competitive logistics ecosystems”. The meeting of the speakers of African Parliaments takes place “in difficult and exceptional regional and international circumstances, due to the negative consequences of the Covid-19 pandemic on the economic and social levels”, said the speaker of the upper house, adding that “the world is expected to experience the worst economic recession in 90 years, with the ratio of global public debt reaching record and unprecedented levels of global GDP”. Recalling that the foreign policy of the Kingdom, carried by HM King Mohammed VI, is based on support for South-South cooperation and African unity and integration, the speaker of the upper house noted that the relations between Morocco and its African brothers are based on the spirit of solidarity and support for African causes, as evidenced by the historical support provided by the Kingdom to African liberation movements and its constructive proposals and solidarity initiatives, including those aimed at supporting African countries in the face of the pandemic of Covid-19. Since its return to its institutional family, the African Union, Morocco has sought, with sincerity and credibility, to develop strong partnerships with its African depth on the basis of common development guidelines, and according to an approach designed to promote strong investment flows, ensure a continuous transfer of expertise and strengthen mechanisms for co-creation of added value in order to lay a solid foundation for the emergence of an African value chain capable of positioning itself in the system of global value chains, he noted. Benchamach said that Moroccan investments in Africa have increased from 907 million dirhams in 2007 to 5.4 billion dirhams in 2019, recalling the significant contributions made by the Kingdom to strengthen the continent’s training platforms as well as banking systems and governance mechanisms. Morocco has strived to broaden the scope of its partnerships to include new strategic sectors such as energy, he noted, adding that the Moroccan-Nigerian partnership will allow for the completion of one of the world’s largest gas pipelines, which marks a deep transformation of the world’s energy map, and a smart approach to connecting Nigeria and 13 other African countries with the European energy system via a strategic energy corridor.