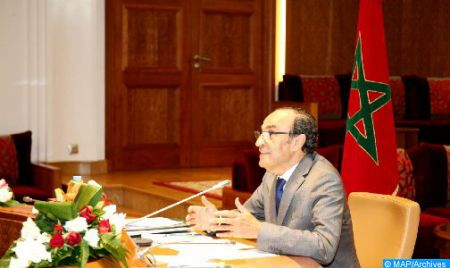 Speaker of the House of Representatives, Habib El Malki called, Friday in Rabat, for the creation of a Moroccan-Mauritanian parliamentary forum that will meet periodically in both countries, and which will be a space for dialogue and exchange of views on ways to raise bilateral relations for more solidarity and cooperation. This call was made during a meeting of El Malki with a parliamentary delegation of the Mauritanian National Assembly led by the first vice-president, Sidney Sokhona, on the sidelines of the consultation meeting of speakers of African parliaments, which was held Thursday in Rabat. During this meeting, El Malki welcomed the “fraternal relations that unite the two peoples and countries”, noting that parliamentary diplomacy is able to open new horizons to cooperation between the two countries. He also called for the institutionalization of relations between the two legislative institutions through the signing of a memorandum of cooperation between the two parties. For their part, members of the Mauritanian parliamentary delegation stressed the importance of strengthening cooperation relations between the Moroccan House of Representatives and the Mauritanian National Assembly, calling for intensifying the exchange of visits and sharing of experiences and expertise. They also stressed the importance of the role that Morocco plays in solving the problems that afflict the African continent, adding that the return of Morocco to the African Union in 2017 has come to fill a great void, the statement said. The members of the delegation also welcomed the support provided by Morocco to Mauritania in terms of training and education, as well as the development of the Kingdom in the agricultural, economic, health sectors as well as other areas.