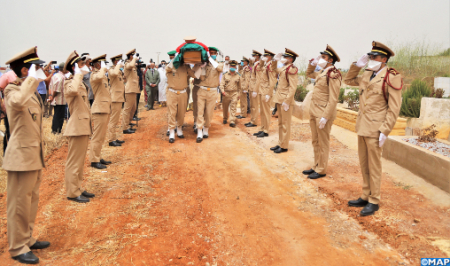 The funeral of the late Moulay Driss Archane, retired medical major general, who died on Sunday at the age of 88, took place on Monday in Tiflet. The body of late Archane was buried in the Sidi Ali Garnoun cemetery after the prayers of Adduhr and of the deceased, in the presence of several officials and civil and military personalities, friends and family members of the deceased, in particular the Inspector of the military health service of the Royal Armed Forces (FAR), Brigadier General Mohamed El Abbar, and the commander of the Place of arms of Kénitra. In testimonies to M24 channel during the funeral, Mahmoud Archane praised the sense of devotion to the homeland of his late brother, underlining his passion for science and knowledge, “so many qualities that helped him reach the summit in the field of medicine”. During his lifetime, the deceased made sure to convey the values ​​of patriotism and attachment to the unwavering values of the Nation to the whole family and, beyond, to all those who knew him, he added, noting his unwavering loyalty to the Monarchy. Former inspector of the Military Health Service and former President of the National Order of Physicians, the late Archane also served as Director of the Royal School of Military Health Service. He is the only Moroccan, to date, to be admitted as a member of the prestigious French Academy of Medicine.