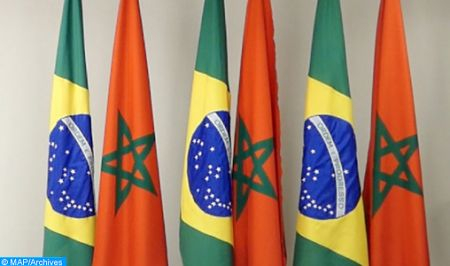 Morocco and Brazil reiterated, on Monday, their willingness to pursue the dynamics of bilateral cooperation, in order to set up a multidimensional Strategic Partnership based on political dialogue and economic cooperation, in accordance with the High Guidance of His Majesty King Mohammed VI. According to a Moroccan diplomatic source, this desire was expressed by both parties during an exchange between Minister of Foreign Affairs, African Cooperation and Moroccans Abroad, Nasser Bourita, and his Brazilian counterpart, Carlos Alberto Franco França. On this occasion, Bourita congratulated França on Brazil’s election as a non-permanent member of the UN Security Council for the period 2022-2023, which “attests to the trust, credibility and reputation that Brazil has always enjoyed in the international community”. Regarding the Moroccan Sahara issue, França expressed “Brazil’s congratulations to the Kingdom of Morocco for its serious and credible efforts” and reiterated his country’s support “for the UN process to reach a just, realistic and pragmatic solution to this regional dispute”. The two ministers also exchanged views on a number of regional and international issues of common interest and agreed to continue to work together on a number of issues, in particular the South Atlantic, which has proven strategic potential for both countries, particularly in view of the fact that they each have the largest sea fronts on both sides of the South Atlantic. In a statement made public in Brasilia, the Brazilian ministry expressed its “commitment to deepen the dialogue and strengthen the strategic partnership with Morocco, a country that has established itself, at the international level, as a relevant actor for the promotion of peace, security and religious tolerance. The same source praised the “balanced positions (of the Kingdom) which have contributed to consensus building and the peaceful resolution of conflicts and crises”. Also, the Brazilian ministry stressed, the exchanges between the two officials focused “on the expansion and diversification of the economic partnership”, noting that Brazil and Morocco maintain “significant” bilateral trade and mutually beneficial investment flows. “In 2020, bilateral trade amounted to 1.78 billion dollars,” said the same source, recalling the signing in 2019 of the Agreement on Cooperation and Facilitation of Investments (ACFI) between the two countries. Morocco is the third most important market for Brazilian agricultural products in Africa and North Africa and is an important destination for Brazilian industrial exports, the Brazilian ministry said. Finally, noted the Brazilian diplomacy, the exchanges between the two ministers focused on the prospects for expanding trade between Morocco and the Southern Common Market (MERCOSUR).