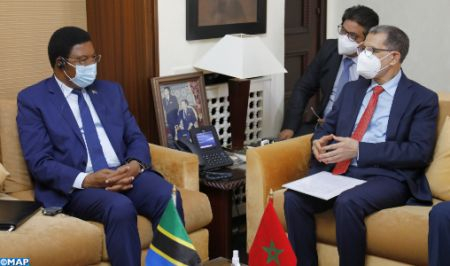 The Head of Government Saad Dine El Otmani met, on Tuesday, with the Prime Minister of Tanzania, Kassim Majaliwa, on the different aspects of the relations of friendship and cooperation between the two countries and the means to strengthen them. These talks were an opportunity for the two parties to review the prospects for strengthening and expanding bilateral cooperation in different areas, the Department of the Head of Government said in a statement. In this regard, the Tanzanian Prime Minister expressed his country’s aspiration to benefit from the expertise gained by Morocco and its successful experiences in many areas of development such as agriculture, fisheries, tourism, renewable energy, the manufacturing industry and the fertilizer industry. Majaliwa also expressed the gratitude of Tanzania for the support given by the Kingdom, in particular in terms of human resources training, hosting students in various national institutions and supporting the development of the sports sector, the statement said.  On this occasion, El Otmani reiterated Morocco’s permanent disposition to support the development and transfer of expertise to friendly African countries, as well as the Kingdom’s openness to all development programs and projects benefiting the populations of the continent, in accordance with the convictions and objectives of the African policy adopted by Morocco under the wise leadership of His Majesty King Mohammed VI, the same source said. In addition, the Head of Government stressed that the visit of his Tanzanian counterpart to Morocco, along with a large government delegation, would open up new horizons for bilateral cooperation in various fields.