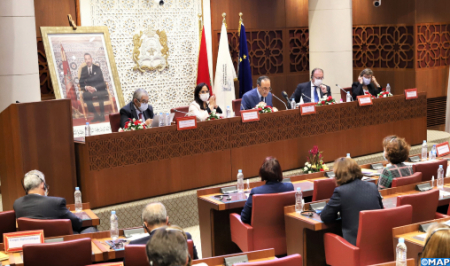 The Moroccan Parliament and the Parliamentary Assembly of the Council of Europe (PACE) organized, on Tuesday in Rabat, a conference on the theme “Women in politics: how to move towards equality?”. Organized within the framework of the project “Support for the development of the role of Parliament in the consolidation of democracy in Morocco 2020-2023”, the conference was opened by the speaker of the House of Representatives, Habib El Malki, the President of the PACE, Rik Daems, Ambassador of the European Union (EU) to Morocco, Claudia Wiedey, President of the Council of the Moroccan Community Abroad (CCME), Driss El Yazami and President of the National Council for Human Rights (CNDH), Amina Bouayach. This event was attended by Moroccan parliamentarians, their counterparts from the sub-committee on gender equality and the PACE committee on migration, refugees and displaced persons, and the presidents of women’s bodies within the political parties represented in the Moroccan parliament and international experts. The participants discussed in particular the need for increased participation of women in political life and the strengthening of female representativeness in elected bodies and in decision-making positions. Speaking on this occasion, El Malki stressed that Morocco has adopted many legislative mechanisms, including that of positive discrimination, aimed at supporting the presence of women in elected bodies and, consequently, in executive bodies, being aware that the Kingdom has undertaken, over three decades, numerous constitutional, institutional and political reforms, placing the issue of women, gender, women’s rights and the sharing of responsibilities within the family at the heart of his concerns. For his part, Daems congratulated the Moroccan Parliament for the progress of the representativeness of women within it since the adoption of the quota system in 2002, noting that political parties have a major role to play in the fight for equality. For his part, Wiedey said that “while the number of female parliamentarians elected worldwide is higher than ever, the fact remains that equality remains a distant goal”. Bouayach, for her part, said that the issue of women, politics and the path to equality is a topical issue, especially since the epidemiological crisis has given rise to multiple negative repercussions on electoral policies and created more obstacles that hinder the access of women to key positions. For his part, CCME President Driss El Yazami stressed that more than half of migrants in Europe are women, adding that the contribution of women to migration has been largely overlooked.