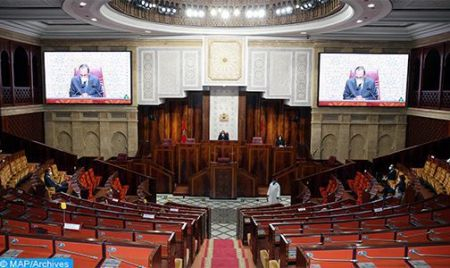 The government’s progress report, discussed during a plenary session on Monday in the House of Representatives, elicited divided reactions between the majority, which described it as “positive,” and the opposition, which criticized it as a breach of the commitments included in the government’s program. The Justice and Development group stressed that the government has made the social sectors its main priority, notably education, health and social protection, by adopting a reforming vision, coupled with an implementation framework, in addition to the mobilization of the necessary financial and human resources. For its part, the Constitutional Rally group considered that the government’s report is “positive in quantitative and qualitative terms”, as evidenced by the figures, indicators and data presented last week by the head of Government, noting that the pace of the executive’s action was high and steady. The Haraki group expressed its positive position on this progress report, which was marked by a number of figures and indicators relating to the national economy, mentioning the difficult situation and context that have had an impact on the growth rate of the gross domestic product (GDP). The Socialist group welcomed the government’s report and achievements in various areas at an exceptional time, marked by the socio-economic impact of the pandemic. On the other hand, the Authenticity and Modernity group (opposition) indicated that the “shocking” growth figures achieved by the government are out of phase with the demographic growth that the Kingdom has experienced in recent years, as evidenced by the growing number of young people who enter the labor market each year and find themselves unemployed. The Istiqlali group for unity and egalitarianism noted that the commitments of the governmental program have not been honored, as only 69% of the 581 measures included in this program have been implemented. As for the parliamentary grouping of progress and socialism, it pointed to the failure of the government to honor its commitments to the citizens, noting that the counter-performances of the executive have affected all areas, far from the optimistic figures presented by the government.