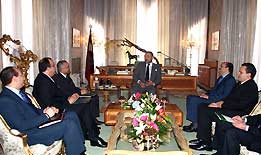 Just a week after the end of the first round of negotiations on the Sahara issue with the Polisario Front representatives, King Mohamed VI chairs a working session in Agadir with the delegation that participated in the talks.
The monarch is determinate to find a consensual solution to the Sahara issue which respects national sovereignty and territorial unity of the Kingdom.
The King gave his instructions for the preparation of the second round of talks scheduled for the second week of August in Manhasset. The sovereign also charged chairman of the Royal Advisory council for Saharan Affairs (CORCAS), Khalihenna Ould Errachid, to hold an extraordinary session of the Council on Friday in the southern city of Laayoune.Mohamed VI chose a regionalization policy as the sole way to development and progress based on democracy that enables Moroccan Southern Provinces' energies contribute to the economic and social development of these regions;

and the position and actions, whether at the local or international levels, of the Sahraouis who have foiled the maneuvers of the enemies of Morocco's territorial unity, give the country more strength to take up challenges within a united Morocco.
Morocco has explained its stance regarding the development of the Sahara issue in the autonomy plan presented to the UN in April.  The proposal is a political solution in line to international legality, for it’s the best way to arrive at a lasting solution to the dispute.
Morocco remains attached to this solution that protects its sovereignty and allows the citizens of the Southern provinces run their local affairs.
The Moroccanity of the Sahara is one of the constant postulate of the Kingdom, King, government and people.  Morocco needs to carry on the process of the development and building undertaken in the Southern Provinces.
Mohamed VI is seeking a solution to the Sahara dispute based on common ground rather than conflict.  His act of leadership is in everyone's interest.