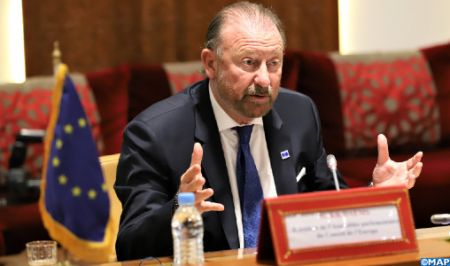 The reform process implemented in Morocco since the adoption of the 2011 Constitution has made it a model on the African continent in terms of human rights, said president of the Parliamentary Assembly of the Council of Europe (PACE), Rik Daems. During a meeting on Monday in Rabat with speaker of the House of Representatives, Habib El Malki, the European official praised the commendable efforts of the members of the Moroccan Parliament’s delegation to PACE, considering them as “the most active”, said a joint statement by the lower house and PACE. Stressing the importance of the legal arsenal which frames PACE’s action, comprising more than 200 agreements, Daems placed particular emphasis on the “Lanzarote” Convention on the Protection of Children against Sexual Exploitation and Sexual Abuse, as well as on the Council of Europe Convention on Preventing and Combating Violence against Women and Domestic Violence (Istanbul Convention), the same source added. The PACE president expressed the wish to be able to count on the assistance of the Moroccan Parliament for the translation into Arabic of the handbook for parliamentarians on the Council of Europe Convention on Preventing and Combating Violence against Women (Istanbul Convention). During the meeting, the two parties took stock of the positive cooperation that is being consolidated between the two institutions in the framework of the status of partner for democracy with the PACE, which Morocco has enjoyed since 2011, according to the same source.