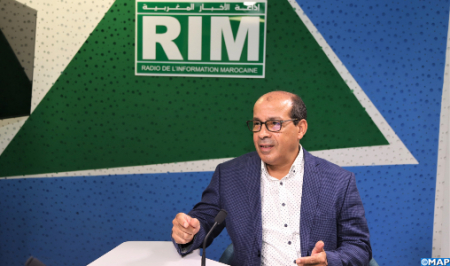 The Deputy Representative and Program Coordinator of the United Nations Population Fund in Morocco, Abdelilah Yaakoub, stressed that the Kingdom has made great strides in several areas of development. Yaakoub, who was the guest of the morning show of the Moroccan Radio Channel “RIM RADIO” on the occasion of the 45th anniversary of the office of the UN agency in Morocco, said that the Fund is actively working to help support the production of data, studies and research aimed at improving government policy-making, promoting reproductive and sexual health of mothers, children and youth, achieving equality and fighting violence against women in addition to building the capacities of young people. The celebration of the anniversary of the office next Friday is an opportunity to examine Morocco’s most important achievements in favor of the population and development since 1975, he said, emphasizing the Kingdom’s accomplishments in several areas, particularly in terms of reducing maternal mortality rate, which fell from 332 deaths per 100,000 births at the start of the 1990s to 72.6 deaths today. In this regard, the UN official noted that the poverty rate has also fallen significantly, whether it is monetary poverty which has dropped from 15% in 2001 to 2.9% today, or multidimensional poverty which decreased from 58% in the early 1990s to 8% in 2014. Yaakoub highlighted the challenges and difficulties to be overcome despite these positive indicators, particularly in terms of regional and gender disparities, illustrating his remarks by the example of the activity rate which stands at 21% among women against 70% for men. Regarding the functioning of the UN agency in Morocco, Yaakoub explained that the Fund operates according to cycles of cooperation, each extending over a period of five years, and the content of which is determined in a participatory manner with government institutions, civil society and the private sector among other partners.