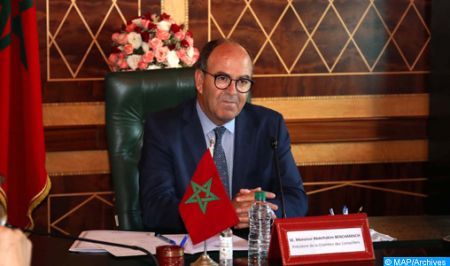 The legislative texts approved during the current legislature stood at 444, a figure dominated by bills and organic laws (93%), said Thursday in Rabat, speaker of the House of Advisors (upper house), Hakim Benchamach. In an address on the occasion of the closing of the April 2021 session, Benchamach stressed that the initiatives of the parliament have played an important legislative role, both in terms of proposed laws, of which 7% were approved, and in terms of amending bills and organic laws, with the House of Advisors having made amendments to nearly 20% of the approved bills. He noted that this result is important if we take into account that 45% of the bills submitted to the House of Advisors during the legislature concerned international agreements, treaties, memoranda of understanding with foreign countries or the ratification of statutes of international or regional organizations. He added that the upper house has approved during the session of April 2021, a total of 50 legislative texts, against 9 bills during the extraordinary session of last March, noting that this progress report includes five bills, two of which relate to the amendment of organic laws, four organic bills, three framework bills, a bill on the charter and 46 ordinary bills.