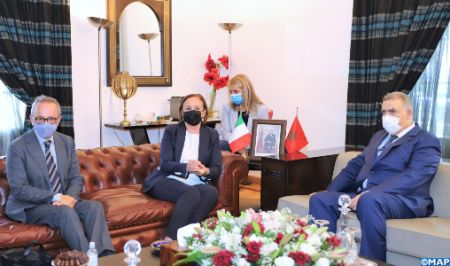 Interior Minister Abdelouafi Laftit held a working meeting, on Friday in Rabat, with his Italian counterpart Luciana Lamorgese, in which took part officials from the Interior Departments of the two countries. On this occasion, Laftit noted the quality of cooperation between the Ministries of the Interior of the Kingdom of Morocco and the Italian Republic, which is called upon to be further strengthened, given the many challenges, especially those related to security and migration, facing the two countries, said a press release from the Interior Ministry. He recalled, in this regard, that a responsible approach and efficient cooperation are the appropriate tools to address these challenges. With regard to police cooperation, particularly in the fight against terrorism and organized crime, the Minister welcomed the fruitful collaboration between the security services of the two countries, marked by regular coordination and a permanent exchange of information and intelligence. Regarding the issue of unaccompanied minors in an illegal situation, Laftit recalled the clear and firm commitment of the Kingdom of Morocco to accept the return of duly identified unaccompanied minors, underlined the same source. In this perspective, he recalled that the Moroccan Departments concerned are working for the final settlement of this issue in application of the Very High Instructions of HM King Mohammed VI. At the end of this meeting, Laftit specified that the meeting with the Italian top official is of particular importance and will undoubtedly help to strengthen the cooperation relations between the two ministries and to bring closer points of view on priority issues of shared interest, concluded the press release. After her meeting with Laftit, the Italian Minister was received by Minister of Foreign Affairs, African Cooperation and Moroccans Abroad, Nasser Bourita.