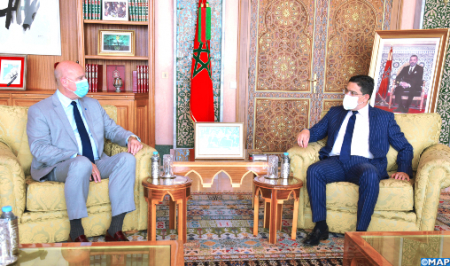 Morocco is a very important partner in the coordination of democracy issues at the international and regional levels, said Friday in Rabat, Secretary General of the Community of Democracies, Thomas E. Garrett, on visit to the Kingdom. The Kingdom is “a very important partner in our work in coordinating issues of democracy and human rights internationally and regionally,” he said in a statement to the press after his talks with minister of Foreign Affairs, African Cooperation and Moroccans Abroad, Nasser Bourita. Morocco, Garrett said, is “one of the original founding members of the Community of Democracies in 2000 and is the only country in the region to sit on our Board of Directors”. The Secretary General of the Community of Democracies also expressed his great joy to return to Morocco, noting that his first visit was in November 2019. During the last visit, recalled Garrett, exchanges with Bourita had focused on the ability of democracy to involve the various components of society in the fight against violent extremism, noting that these exchanges have contributed to the creation, in recent months, of a training program dedicated to youth. This program, he added, “will hopefully be followed by an international conference later this year.”