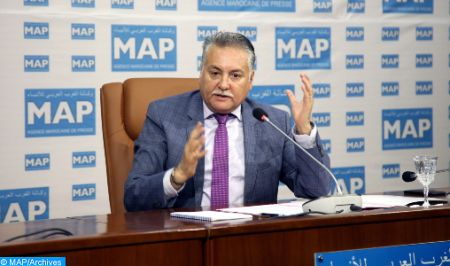 Secretary general of the Progress and Socialism Party (PPS), Mohammed Nabil Benabdellah said, Tuesday in Rabat, that the creation of a political environment reconciling Moroccans with public sphere is a prelude to the success of the upcoming elections. Benabdellah, who was the guest of MAP Forum under the theme “The PPS and the 2021 elections: preparations and prospects”, stressed that “the success of the next elections depends on the establishment of a political space and atmosphere that can reconcile Moroccans with politics and the management of public sphere”. “The opening of new pages at the economic, social, cultural…level requires, in parallel, the opening of a new page at the political and democratic level in order to move forward together towards the new development model,” he stressed. Benabdellah noted, in this regard, that “we hoped that there would be structural initiatives that would introduce reforms to the political scene and allow for a review of how to approach the elections, and how to produce a majority and a strong government”. As for the perspective of the next elections, Benabdellah said that the party has presented its program, which includes major axes, notably placing the human element at the heart of the development process and the economic take-off. On this occasion, he highlighted the issue of restoring citizens’ trust in politics, stressing the shared responsibility of all actors to achieve this goal. The Secretary General of the PPS insisted on the role of political parties in the credibility of the political scene through the development of a credible discourse and a transparent and democratic internal management, in addition to the opening to competences.