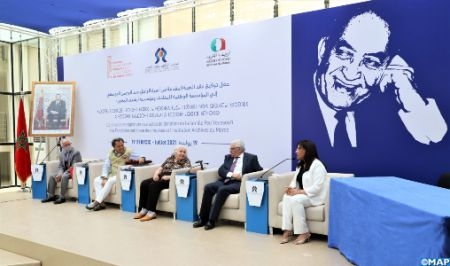 The deeds of donation of the late Youssoufi family to the National Museums Foundation (FNM) and to the Moroccan Archives Institution were signed on Monday at the headquarters of the National Human Rights Council (CNDH) in Rabat.

The wife of the late Abderrahmane Youssoufi, Helene Youssoufi, and the executor of the Youssoufi family, M’barek Bouderka, signed the two deeds with, on the one hand, the president of the FNM, Mehdi Qotbi, and, on the other hand, with the director of the Archives of Morocco, Jamaa Baïda.

The signing ceremony was attended by a number of personalities, friends and companions of the deceased, notably Andre Azoulay, advisor to HM the King and president and founder of the Essaouira-Mogador Association, and Mustapha El Ktiri, high commissioner for former resistance fighters and former members of the liberation army.

On this occasion, the deceased’s wife said that in order to fulfill her husband’s wish to bequeath to the FNM and the Moroccan Archives his tangible and intangible assets in the hope of preserving the imprint of his unparalleled dedication to the nation, democracy and human rights, the deeds of donation, signed in such a symbolic place for the struggle of Abderrahmane Youssoufi, is the logical outcome of a whole life guided by a sense of duty and sacrifice for the country.

For his part, the president of the FNM, Mehdi Qotbi noted that HM King Mohammed VI has shown the way by honoring personalities who serve the country at all levels, including the late Youssoufi who was and will remain a great figure of the national movement and a statesman who marked the history of his country.