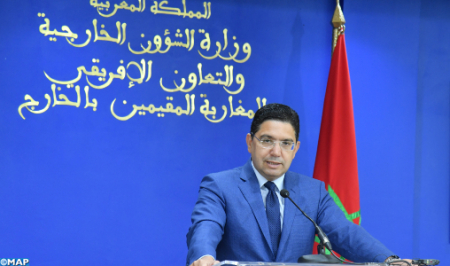 Relations between Morocco and Malawi have undergone significant development in all areas since this southern African country withdrew its recognition of the fake “sadr”, underlined, on Tuesday in Rabat, Minister of Foreign Affairs, African Cooperation and Moroccans Abroad Nasser Bourita. “Today, there is the High will of HM King Mohammed VI and President of Malawi Lazarus Chakwera to develop relations in depth and revive bilateral cooperation mechanisms,” said Bourita, who was speaking during a press briefing after his talks with his Malawian counterpart, Eisenhower Nduwa Mkaka. “We have agreed to hold, at the beginning of next year, a joint commission to develop economic relations, in particular in the agricultural and technical field, and academic support to Malawian students in Morocco in the framework of scholarships offered by the Moroccan state,” he said. Morocco and Malawi have the same position on several issues, including those relating to peace and security in sub-Saharan Africa, and “on which cooperation will be very important”, said the minister. This development of relations with Malawi falls within the framework of HM the King’s high will to open up to English-speaking African countries, to establish channels of communication with them and to agree on development projects in all fields, he added, noting the upcoming opening of a Moroccan representation in Malawi. The Moroccan minister took this opportunity to thank his counterpart from Malawi for the firm and steadfast support of his country for the sovereignty of the Kingdom over its Sahara and for its territorial integrity. Referring to the opening of a consulate by Malawi in Laâyoune, Bourita said that this consulate will be the 24th in the southern provinces and the 18th in an African country, that is one third of the total number of African states. “These states represent all regions of the African continent and Malawi will be the 5th member country of the Southern African Development Community (SADC) to open a consulate in the Moroccan Sahara, after the Democratic Republic of Congo (DRC), Zambia, Eswatini and Madagascar”, he noted, congratulating in this regard his Malawian peer for the presidency by his country of SADC starting next month.