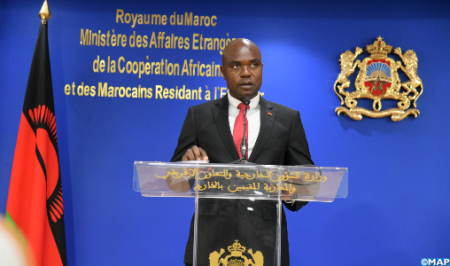 Malawian Minister of Foreign Affairs and International Cooperation Eisenhower Nduwa Mkaka announced, on Tuesday in Rabat, his country’s decision to open a consulate in Laayoune. Speaking at a press briefing following his talks with Minister of Foreign Affairs, African Cooperation and Moroccans Abroad Nasser Bourita, Malawi’s top official indicated that his country has also decided to open an embassy in Rabat. The Malawian Minister reiterated, on this occasion, the firm and unwavering support of his country for the sovereignty of the Kingdom over its Sahara and for its territorial integrity. Nduwa Mkaka also expressed his country’s gratitude to HM King Mohammed VI following the health equipment donation by the Kingdom to more than twenty African countries from the five regions of the continent. He also praised the fill-finish manufacturing of the anti-Covid19 vaccine by Morocco, “an initiative which once again confirms the position of the Kingdom as a leading figure in the fight against the pandemic”. In addition, Nduwa Mkaka said that “our two countries have traditional relations based on mutual brotherhood”, noting that his discussions with Bourita also focused on bilateral investments and “topical issues such as the fight against terrorism and mutual support within international and continental organizations”.