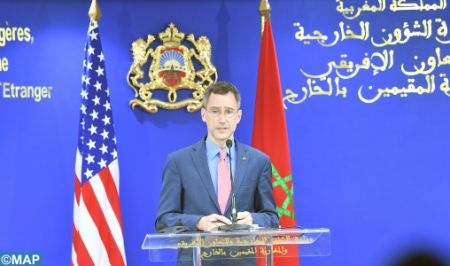 The strategic partnership between Morocco and the United States is growing stronger, under the leadership of HM King Mohammed VI, underlined, Wednesday in Rabat, Acting Assistant Secretary of State for Near Eastern Affairs Joey Hood. Speaking at a press conference held at the end of his talks with Minister of Foreign Affairs, African Cooperation and Moroccans Abroad Nasser Bourita, the American diplomat highlighted the long-standing and “deep” relations uniting the two countries, which commemorate the bicentenary of the first US diplomatic mission in the Kingdom (The American Legation of Tangier) and celebrate their “200 years of friendship”. In this sense, he recalled that Morocco was the first country to recognize the independence of the United States. Hood also praised Morocco’s ongoing and valuable support in matters of common interest, such as the Middle East peace process, stability, security and development in the region and throughout the African continent. “Morocco is a close partner of the United States on a number of security issues,” he noted, adding that the Kingdom participates alongside the United States in more than 100 military engagements each year, including the African Lion, the “largest military exercise on the continent”. In the same vein, the American diplomat recalled that the two countries signed, last year, a ten-year roadmap to strengthen cooperation in defense, welcoming in this regard “a symbol of our long-standing strategic cooperation”. Referring to bilateral economic relations, Hood noted that Morocco is linked by a free trade agreement (FTA) with the United States, which is celebrating its 15th anniversary this year. “We and our companies see Morocco as a gateway to the African continent,” he said. Hood said both countries have benefited “enormously” from this agreement through job creation, adding that trade has quintupled to $ 5 billion annually. He also said that more than 150 American companies are active in the Kingdom. On another note, the American diplomat highlighted the American-Moroccan cooperation in the fight against the new coronavirus (Covid-19), welcoming the “largely successful” national vaccination campaign.