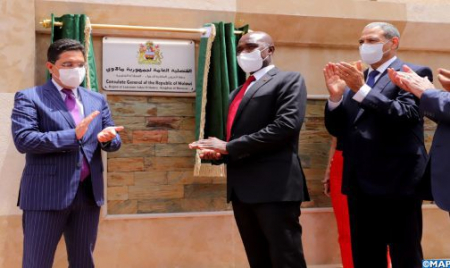 The opening by several African countries of diplomatic representations in Morocco’s southern provinces is the result of the enlightened vision of HM King Mohammed VI, said Thursday the minister of Foreign Affairs, African Cooperation and Moroccans abroad, Nasser Bourita. This “well-studied” African strategy is based on the opening of the Kingdom to all regions of the continent and the desire to make the southern provinces a link between Morocco and its African depth, said Bourita at a joint press briefing with his counterpart from Malawi, Eisenhower Nduwa Mkaka, at the end of the inauguration ceremony of the consulate general of this country in Laayoune. This new African policy of the Kingdom, the foundations of which were laid by the Sovereign, had a “very positive” impact on the development of the issue of the territorial integrity of the Kingdom, the minister pointed out. Bourita stressed that 1/3 of the consulates opened so far in Laayoune and Dakhla belong to African countries representing all regions of the continent: West Africa, East Africa and Southern Africa, adding that several other countries of the continent have expressed their desire to inaugurate very soon representations in the southern provinces of the Kingdom. He recalled in this regard that five countries of the Southern African Development Community (SADC) now have diplomatic representations in the Moroccan Sahara: DRC, Zambia, Eswatini, Comoros Islands, in addition to Malawi. Bourita noted that the opening of a Malawian consulate in Laayoune is part of the new dynamic of bilateral relations, after the decision of this country to withdraw in 2017 its recognition of the so-called “SADR” and the will of the two States to further develop their cooperation. Since that date, he underlined, relations between the two countries have experienced sustained development in the political and economic sectors and in terms of experience-sharing in several areas, recalling the decision of Morocco and Malawi to hold soon the bilateral joint commission and to open representations in Rabat and Lilongwe. The minister expressed the hope that the opening of the Malawian consulate in Laayoune would further develop economic relations and human exchanges between the two countries and the two peoples.