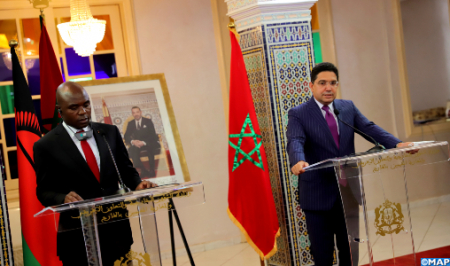 Malawi will continue to support the role played by the UN as an “exclusive and consensual” framework for the resolution of the regional conflict over the Sahara, said Thursday Malawian Foreign Minister, Eisenhower Nduwa Mkaka. “My country will also continue to advocate for the role played by the United Nations as an exclusive and consensual framework to achieve a lasting solution to this regional dispute,” Nduwa Mkaka said at a joint press briefing with the Moroccan minister of Foreign Affairs, African Cooperation and Moroccans abroad, Nasser Bourita. Malawi’s FM, who co-chaired with Bourita the opening ceremony of his country’s consulate general in Laayoune, reiterated his country’s “unwavering” support for Morocco’s territorial integrity and sovereignty over the Sahara. By opening a consulate general in Laayoune, he said, Malawi reaffirms its long-term commitment to further develop the partnership that binds it to the Kingdom of Morocco, adding that he is “convinced” that this “major” event will inaugurate a new era marked by the development of bilateral relations and increased cooperation in all areas of common interest. Malawi’s top-diplomat voiced the hope that the inauguration of the consulate would help deepen political dialogue between the two countries and develop their bilateral trade and investment flows. He pointed out that the city of Laayoune has the potential to become the future economic hub of Africa and to contribute positively to the development of the continent, saying he is “impressed” by the quality of infrastructure in the region.