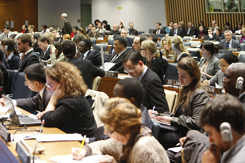 The European Union (EU) has expressed concern about the implications of the Sahara conflict for regional security and cooperation and reiterated its calls to conduct a census of the people living in the camps of Tindouf.
In an address before the UN General Assembly 4th Committee on Monday in New York, the representative of the EU Delegation to the UN said “the EU remains concerned about the implications of the (Sahara) conflict” for “security and cooperation in the region.”
The EU is reaffirming its “full support for the efforts” made in this regard to reach “a just, lasting and mutually acceptable solution.” Likewise, it encourages the parties to the conflict and neighboring states to continue to work toward this solution in the framework of the United Nations and “to allow the political process to move forward,” the EU delegate, Yera Ortiz de Urbina, said, stressing the need for the parties “to show more political will to move forward towards a solution.”

The representative of the EU delegation also said that the EU supports the Security Council’s request that the UN High Commissioner for Refugees sticks to its proposal to conduct a census of the populations in the Tindouf camps.
The same day, the 4th Committee adopted, without a vote, a draft resolution on the Moroccan Sahara, reiterating the UN support to the negotiation process in order to reach a just, lasting and mutually acceptable solution.
Commenting the vote, Morocco’s ambassador to the UN, Mohamed Loulichki, said the UN General Assembly has thus adhered to the Security Council resolutions and confirmed the relevance of the Moroccan autonomy plan for the Sahara and its adequacy with the objective sought, namely a compromise solution in which there will be no winners and no losers.
In the same draft resolution, the General Assembly “recognizes ipso facto the need to conduct a census of the populations of the Tindouf camps, in accordance with international humanitarian law and the HCR practice.”