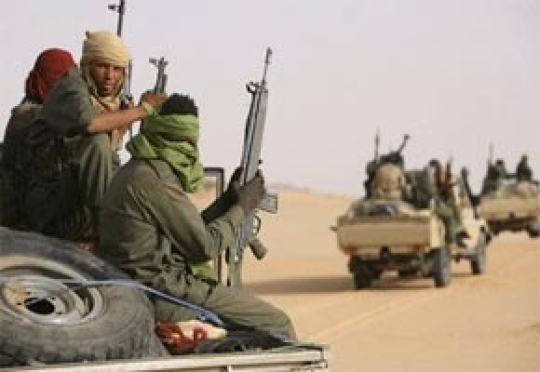 The finger is once again pointed at the Polisario leadership for its collusion with terrorist networks in the Sahel strip. Hundreds of armed Sahrawi refugees were recently spotted while leaving discreetly the Tindouf camps, although these camps are closely monitored by the Algerian army and the Polisario militia.
According to informed sources from the camps, over the past weeks, dozens of pick-ups and all terrain vehicles carrying dozens of armed men sneaked across the Algerian desert towards Northern Mali and more precisely towards the cities of Timbuktu and Gao which are under the control of armed groups of AQIM, the Mujao and Ansar Dine.
These convoys paraded unworried before passive Algerian army units and officers of the Algerian Intelligence and Security Department (DRS – Military Intelligence). Observers explain this passivity by Algerian authorities’ rejection of any foreign military intervention in the Sahel, especially in the Malian northern region bordering Algeria’s southern frontier.
Witnesses in Gao (northeast) and Timbuktu (northwest) confirmed to AFP the arrival over the past few days of hundreds of armed Sahrawi fighters.

According to a Sahrawi living in the Aouserd camp, everybody in the Tindouf camps talks about these departures and the high bonuses that the Sahrawi volunteers will get after enlisting in the ranks of the Islamist jihadists who are readying to counter an impending African military offensive in Northern Mali.
An intervention force of about 3,500 soldiers from the member countries of ECOWAS is actually preparing to take action in northern Mali, with French and American logistical support.
These preparations have alerted the Islamist warlords who launched across neighboring countries, notably in Sudan and in the camps of Tindouf, a call for jihad against the Malian army and the African force.
The kidnapping in October 2010 of three aid workers, two Spaniards and an Italian, from the Hassi Rabouni camp with the documented complicity of Polisario leaders had already lifted the veil on the connivance between the Sahrawi separatist movement and terrorist networks in the Sahel. Now, the latest news leaves no doubt as to the existence of such a complicity.