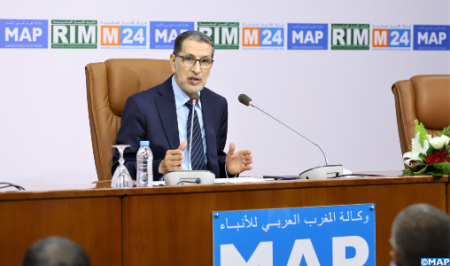 The government has initiated major reforms and laid the foundations that will frame the work of future governments to continue building the Morocco of tomorrow, said Tuesday in Rabat the secretary general of the Party of Justice and Development (PJD), Saad Dine El Otmani. Morocco now has a solid base built on precise programs and a clear vision to build up the present and the future, said El Otmani, who was the guest of the MAP Forum held under the theme “the 2021 elections, is it time for assessment for the PJD?”. “For the first time, four framework laws relating to education, health coverage, tax reform and the reform of public institutions and enterprises were adopted,” he added, stressing in this regard the need to continue this “construction of the future”. He also shed light on a set of reforms launched by the government, such as the reform of regional investment centers, the establishment of administrative decentralization projects and the simplification of administrative procedures and formalities. The government was keen to orient its programs mainly to the benefit of vulnerable categories and the middle class by increasing the budgets allocated to them and by expanding the percentage of beneficiaries, he noted. Commenting the achievements of the government, El Otmani referred to the program for the generalization of primary education which “now records an enrollment rate of up to 72%”, as well as the creation of four faculties of medicine and hospitals to expand the possibility to train more medical executives in the Kingdom. The government’s record has been “honorable”, although there are many issues that need to continue to mobilize efforts, especially in the sectors of health, education and employment, said El Otmani. Regarding the management of the COVID-19 pandemic and the fight against its repercussions, the political leader stressed that the current situation is “delicate” and constitutes a challenge for all countries, noting that an increase in cases has been recorded recently, particularly in terms if critical cases, deaths and the occupancy rate of intensive care beds in some cities. Morocco is facing a “new challenge” which has led the government to take, on Monday, a set of decisions that will come into force on Tuesday, with the aim of protecting citizens “during this difficult circumstance, especially in the light of the spread of the “Delta” mutant characterized by its rapid spread, said the secretary general of the PJD. El Otmani also stressed that these measures are “necessary” and remain temporary with the aim of curbing the spread of the virus through the expansion of the vaccination campaign in order to approach the achievement of collective immunity to return to normal life, calling on citizens to respect precautionary measures and to demonstrate a spirit of individual and collective responsibility. The government is counting on the conscience and intelligence of Moroccans who have “largely” engaged in the national vaccination campaign, he said, noting that the number of beneficiaries of vaccination in the Kingdom constitutes two thirds of the total vaccinated population in Africa. In this regard, El Otmani noted that some of the “deficiencies” that may affect the vaccination campaign should not mask the achievements made, calling “valuing the achievements and avoiding underestimation in order to do justice to Morocco in all the efforts it is making to deal with the pandemic”. He recalled, in this context, “the great efficiency, the proactive and prospective vision and the decisive and important decisions taken by Morocco, upon the instructions of His Majesty King Mohammed VI, in order to contain the pandemic and respond to the necessary needs of citizens. He shed light on the “success stories” written by the Kingdom in the management of the pandemic, starting from the production and export of masks to the reception of vaccines, in the light of fierce international competition and insufficient supply to meet demand. MAP Forum is a platform for debate on current political, economic, cultural and social issues. It brings together government officials and personalities from various backgrounds as well as media representatives.