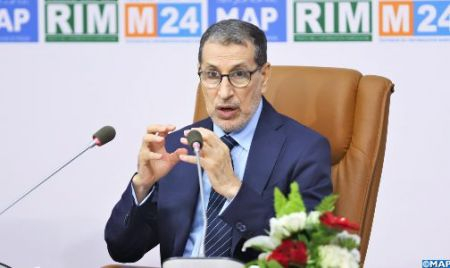 The secretary general of the Justice and Development Party (PJD), Saâd Dine El Otmani, called on Tuesday in Rabat to restore confidence in political action and in political parties in order to strengthen adherence to the electoral operation. El Otmani who was the guest of MAP Forum, held under the theme “The 2021 elections: is it time to take stock of PJD’s results?”, said that the restoration of confidence in political action is one of the most important aspects of the PJD’s electoral program, emphasizing the need to strengthen confidence between citizens and political parties with a view to ensuring the success of the next elections. After considering that “politics without trust will not be useful for the country”, the SG of the PJD stressed the importance of intensifying the efforts of all actors, including the media, political parties, government, the state, civil society and citizens, in order to strengthen adherence within the political scene and enrich a “sincere and useful” debate. The low turnout in elections is considered a major challenge in all world democracies, noted, in this regard, El Otmani, adding that the increase in its rate relies mainly on the restoration of confidence in the political action. Warning against the risks relating to “electoral money and political transhumance”, the SG of the PJD stressed that the adoption of the electoral quotient and the abolition of the threshold will complicate alliances between parties. He deemed that the electoral quotient “is undemocratic, since it does not take into account the rate of seats in relation to the votes of citizens”, and contributes to “underestimating the political action and reducing the citizens’ confidence in the electoral operation, which is no longer decisive”, noting that its objective is to limit the results of a particular party and reduce its chances in the next elections.