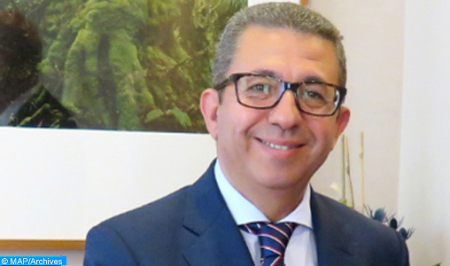 The management of the Covid-19 pandemic has shown Morocco’s robustness, speed and ability to innovate, said Moroccan Ambassador to Australia Karim Medrek. “It is in these moments that the real leaders appear and transmit a positive energy despite all the difficulties. The management of the pandemic has shown the robustness, the speed and the ability of Morocco to innovate”, wrote Medrek in an article published by the Australian online newspaper “Sydney Sun”, entitled “The Kingdom of Morocco: a vision for the future”, on the occasion of the celebration of the 22nd anniversary of the Sovereign’s accession to the Throne of His glorious ancestors. The Kingdom’s response to the pandemic was “guided by the Royal vision which is based on anticipation, proactivity and the priority of the health of the citizen,” he underlined. The diplomat said, in this regard, that Morocco has completely vaccinated more than 10 million people, or 30% of the population, noting that to achieve medical autonomy, the Kingdom has signed agreements with two leading pharmaceutical industry companies to produce anti-Covid19 vaccines in order to achieve self-sufficiency and to meet the needs of the African continent. Morocco saw the health crisis as an invitation to necessary transformations, despite all the difficulties caused by the spread of the pandemic, he said. Since March 2020, the world has been living in a time where “uncertainty becomes the rule” and is facing a multidimensional crisis, said Medrek, adding that leaders have been forced to readjust their policies in order to overcome the challenges this crisis has imposed.