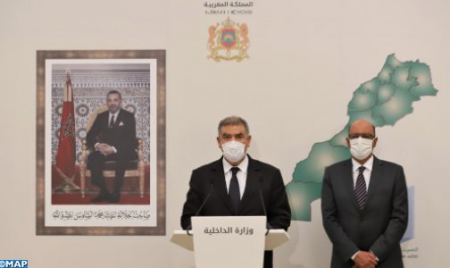 The elections for members of the professional chambers, held on Friday, took place under normal conditions, in accordance with the legal provisions, guarantees and rules governing electoral operations, in the presence of representatives of all the lists, said Interior Minister Abdelouafi Laftit. “No incident likely to influence the course of the operation of voting, counting the ballots, counting the votes or announcing the results was recorded, apart from a few isolated and limited incidents which were dealt with immediately in accordance with the legal and judicial procedures in force,” said the minister in a statement to the press, in the presence of the minister delegate for the Interior Noureddine Boutayeb. The electoral campaign took place, generally, in good conditions and nothing impacted its normal course, noted Laftit, specifying that in total, 12,495 candidatures were submitted to fill 2,230 seats in the election of members of professional chambers, i.e. a national average of nearly six candidates for each seat, up 7.27% compared to the 2015 election. These candidatures are distributed among the chambers of agriculture with 2,508 candidatures to fill 673 seats, i.e. an average of nearly 4 candidatures for each seat, the chambers of commerce, industry and services with 5,408 candidatures for 872 seats, i.e. an average of more than 6 candidates, the craft chambers with 4,277 candidates for 558 seats, i.e. an average of nearly 8 candidates, and the fisheries chambers with 302 candidates for 127 seats, i.e. an average of nearly 3 candidates for each seat. Regarding the candidatures submitted by women, Laftit underlined that the legislative provisions adopted for this election, in support of the access of Moroccan women to the various professional Chambers, allowed a qualitative leap in terms of the number of female candidates which represents 4.5 times the one recorded in 2015. They were therefore 3,055, representing an “encouraging” rate of 24.45%, which is close to a quarter of the submitted applications, against only 653 women in 2015 (5.6 %). The candidatures submitted for the Chambers of Commerce, Industry and Services and the Chambers of Crafts have seen a notable increase in comparison with the other Chambers, said the minister, indicating that the greatest number of female candidates was registered among professionals in the commerce, industry and services sectors, ie 1,555 candidates (28.75%), against 1,268 among crafts professionals, around 30% of applications submitted in this sector. Regarding the age of candidates, Laftit said that 70% are under 55 years old, of which 36.26% are not over 45 years old, adding that in terms of academic training, 60% of candidates have a higher or, at least, secondary level of education.