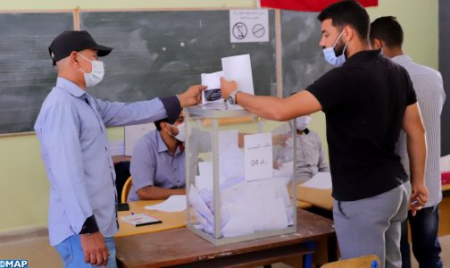 The National Rally of Independents (RNI) won 638 seats (28.61 pc) in the elections of professional chambers, thus taking the lead of this poll, which took place Friday throughout the national territory, said the Interior Minister Abdelouafi Laftit. According to the results announced by the polling stations and the central offices for the Chambers of Agriculture, as well as the provisional results of the elections of the Chambers of Commerce, Industry and Services, the Chambers of Crafts and the Chambers of Fisheries, the Authenticity and Modernity Party (PAM) came second with 363 seats (16.28%), followed by the Istiqlal Party with 360 seats (16.14%). Next came the Popular Movement with 160 seats (7.17%), the Socialist Union of Popular Forces (USFP) with 146 seats (6.55%), the Constitutional Union with 90 seats (4.04%), the Party of Progress and Socialism (PPS) with 82 seats (3.68%) and the Justice and Development Party (PJD) with 49 seats (2.20%), added Laftit in a press statement, in presence of Minister Delegate for the Interior Noureddine Boutayeb. The other bodies, 23 parties in total, obtained, all together, 71 seats (3.18%), while candidates without political affiliation won 271 seats (12.15%), he noted. The number of female candidates, elected in the elections to professional chambers, which took place under normal conditions, reached 171 candidates, a rate of 7.67%, said the Minister. These results are based on the results sent, in accordance with the legislative provisions in force, by the polling stations and the central offices for the Chambers of Agriculture as well as the provisional results of the Chambers of Commerce, Industry and services, the craft chambers and the fisheries chambers, pending their confirmation by census commissions chaired by judges, he said. According to him, the Kingdom is committed, with a strong will, in the preparation of the elections set this year, in accordance with the High guidelines of HM King Mohammed VI, guarantor of the democratic choices and protector of representing institutions, which aim to foster Morocco’s place among democratic countries, in harmony with the provisions of the Constitution which stipulates that the legitimacy of democratic representativeness draws its foundation from free and transparent elections. The preparations for the elections of Professional Chambers as well as the next general elections take place in a context marked by the mobilization of Morocco, like all the countries of the world, to face the spread of the covid-19 pandemic, with all what it requires in terms of mobilizing financial and human resources to contain it and cushion its impact, he noted. Despite the constraints linked to the management of the effects of the pandemic, Morocco has once again set an example, through its remarkable capacity to meet the major challenges and its strong determination to continue the process of building and consolidating the institutional and democratic foundation, said Laftit, adding that this has been mirrored today in the holding of elections for professional chambers in accordance with the set timetable and under the best organizational conditions.